We are pleased to announce that the Dursley Running Club 2019 Walk 2 Run programme is open for registration. Places are limited so please register early to avoid disappointment. Register here >>

A good number already signed up for the Indoor Athletics due to start in January, link here >> to register if interested in this.

The U21 Winter Running Programme starts next week too, aimed at developing young adult endurance running ability. Follow this RunTogether link to find out more and register for this programme: link >>

Next Saturday is the KLB School Cross Country racing, so no cross country training, but some warm up drills and haring for our older juniors from 9.30am.

Part of the Gloucestershire AAA, The Berkeley 10k is a fast flat 10k on a RunBritain license. Based on quiet roads with good facilities and chip timing. Every finisher gets a drink from the bar and there are prizes for first three men and first three women, as well as the usual five year veteran age categories. In addition there are team prizes for best four men’s and three women’s teams. 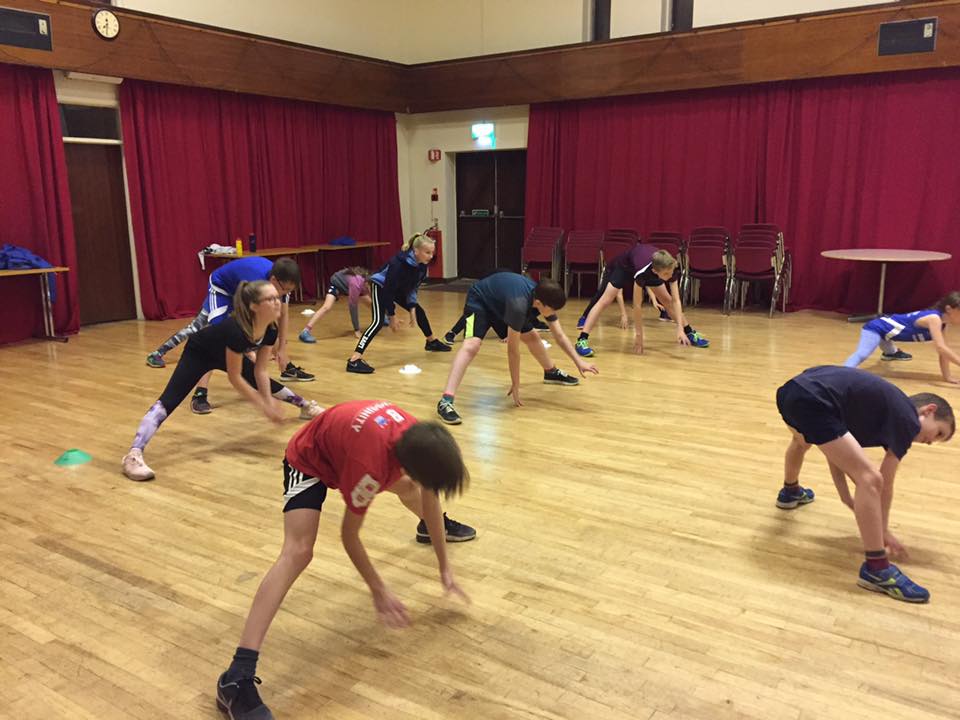 Wednesday was our indoor athletics Sportshall League special. Huge thanks to Elliot from the Cheltenham Harriers travelling down, bringing all the equipment and showing us some of the league events. We had 24 Juniors there and I think they had a great time.

Saturday was both the KLB Cross Country races and the 1st Sportshall League event.

We had 6 Juniors haring and they did a great job in encouraging those younger Juniors around the course. A couple of top performances to mention by name; Bill Smith 2nd place in the yr5/6 boys race and Holly Clarke 4th in the yr3/4 girls race. Well done to all Juniors who took part, from first to last a huge effort well deserving of applause.

In the Sportshall League Olive Jones and Sophie Keevil put in a great performance for the first ever DRC U11 girls team! And Charlie Jones represented the U13 boys for DRC, fabulous. Well done, I’m looking forward to the 24th Nov for our return visit, hopefully with a much bigger team!

Watch this space for our U21s running programme due to start soon (Tuesday evenings). Cross country training 9.30am at the rugby club next Saturday.

The first in the Gloucestershire AAA Cross Country Series saw 31 DRC athletes competing from first timers at junior (George Pitts) and senior level(Rachel Brown, Julie Gowing Jo Feans Martin Bragg & Mark Owen to veterans such as Kevin Jackson & Trevor Lewis who returned to the fray after a few years away. One of the essences of cross country is that each race is totally different, even on the same course, weather & ground conditions adding to the variables of the athletes’ fitness & preparation. Glos AAA had changed the course with a small loop added for some with a long steady climb through the woods for all, the changes made for an interesting & very runnable course. As Storm Callum headed towards the UK, the runners were greeted with very strong winds & a warm day, with car thermometers showing 22 degrees at the time of the Junior races. The wooded section was very humid. For the juniors who have not raced that often judging their effort over this tough course with the conditions was a big ask & they did fantastically well, most importantly they were smiling at the end.

U11 Girls were led in by Holly Clark, all ran controlled races, with Ruby Heath doing well to pick herself up & finish after a tumble in the woods the U11G being DRCs only full Junior team. George Pitts really enjoyed his fisrt XC outing and finished really strongly. In the U13 girls race Lucy Holdsworth was determined to run well, having felt disappointed with her run at Old Down last year. Another controlled run saw her in ninth place for most of the race, and she managed to hold off a strong s challenge in the last 30 metres. James Durden ran in the U17/U20 race, a challenging range of runners for a 16 year old. He found the woods very warm and increasingly tough but he stuck at his task and also managed a strong finish. The cross country will stand him and all the other juniors (hopefully some seniors) in good stead for next summers track events. After the Juniors racing finished the Senior woman, U20/U17L and male vets over 65 were next up. Robyn Jackson(Waite) led the DRC charge with Margaret Jackson returning to competitive running after a long lay with a stress fracture pushing hard on the first lap. A posse of DRC women followed the leading two with as the race started including Rachel Brown, Tara Truman, Rachel Brown, Shona Darley, Julie Gowing, Erica Fuller, with Eileen Hieron and Jo Fearns doing the sweeping. The thorn between these roses was Trevor Lewis, participatingin the M65 plus event. It was great to see Trevor one of the club stalwarts, Dozen Race Director, sub 3 hour marathoner competing again, after a seven year gap apparently! Robyn held on (see parkrun report) for an impressive 8th position, sharpening herself up for the SW Inter Counties 10K road relays where she is representing the County! Margaret also held on after her quick start to place and impressive 2nd in category, her layoff clearly not affecting her competitive spirit too much. Rachel Brown had a great debut, just 3 and half minutes behind Margaret, and I am confident That this gap is going to reduce over the course of the series, perhaps not at the next one as Rachel as has a marathon in between times! She posted ”I ran my first cross country race today. I’m not going to lie, I found it hard. I was quite nervous at the start, lots of fast looking runners. I’d done a warm up lap so knew what to expect of the course. I felt ok on the first lap; the second lap I started to feel it; and by the third lap I struggled up the climb but recovered enough to finish strong”. In fact, Rachel said afterwards that it was the hardest thing she had ever done, and that’s XC for you, constantly adjusting your effort over testing terrain in a competitive environment. Key points from her post are the necessity to walk/run the course and that the nature of courses will tire you out, more so than on a road run where it is much easier to measure effort. With the rest of the women’s team plugging away DRC Woman’s A team were 13th and the Women’s Masters team 9th , great efforts by all, and a salutary lesson about how every run counts at cross country. An email to Glos AAA re the need for F70 and F75 categories needed. The final race of the afternoon was the senior males. A gain a good turnout form DRC although a few senior men were missing, which was likely to impact on the team result. Paul Hockings, James Everett and Mike Brown led the way for DRC disappearing off in the distance with Andy Truswell leading Dave Durden astray with quick start, whilst Tony Freer just keeping a watching brief, another DRC quintet of Kevin Jackson, Dave Wood, Martin Bragg, Nigel Sankey and Jon Tudor. Paul Hockings showed his class, finishing 18th and 3rd in category about a minute and a quarter ahead of James Everett, who admitted that his current preparation of a Coastal Marathon meant he was not a sharp as he would have liked. Mike Brown was another 2 minutes back and disappointed with his run, typical runner! Although he was pleased to be ahead of James for a bit!

As you can see Hannah Osbourne is one happy camper. Travelling North to complete the Leicester Marathon. Hannah has only been training for two years and completed he first marathon, London, in 05:13. Leicester was her fourth marathon. She posted “It was torrential rain and was soaking from the moment I started, a nice route but finished on a one mile hill!! I got a massive PB of 3h 59mins bang on!!”, congratulations Hannah!

Garry Strickland ran the above Half raising money for the International Seafarers Welfare and Assistance Network His posted prior to the event “Anything you can do to help the Plight of Seafarers would be appreciated. Please bear in mind than the majority of all global trade moves by water, just have a look at your worldly possessions to see where they originate!” All in a good cause Garry ran it in a time of 01:38:18, 1241st position and 201st MV45, I am guessing wide age range in this category! He was then off to Ronnie Scotts for some Jazz, NICE! For more info; http://seafarerswelfare.org

Nigel Burford completed his first Duathlon despite a quick parkrun the day before placed 11th and 1 st in category, so clearly his warm up worked, the results seem rather strange , very short transition and bike and very long run 2 so assuming they will be amended. Run T1 bike t2 Run2 Finsh Overall Cat Nigel Burford 10:22 11:03 43:44 01:28:16 11th 8th 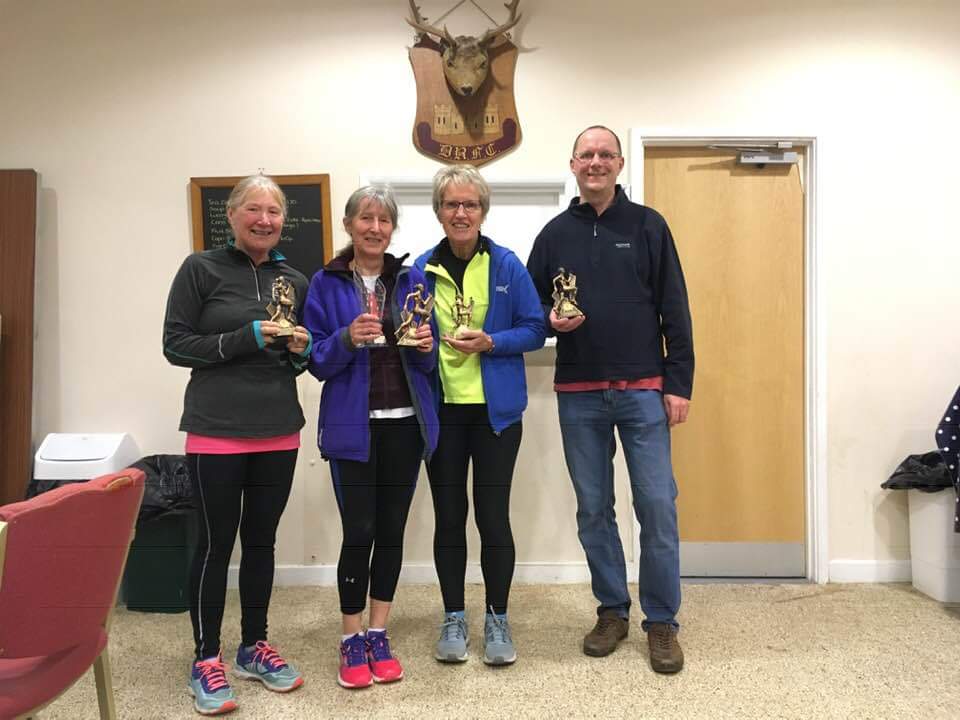 Another chilly night of running on the Wednesday, followed by some great running at the AAA Cross Country on Saturday. It is that time of year when the gloves are out for running, we all get a bit wetter and often muddier but running ability really improves.

I am advised that it is the KLB school cross country next Saturday, so our younger juniors will have the opportunity to run there, and our older juniors get the chance to Hare. Back to cross country training sessions on the 17th.

BIG reminder this week, Wednesday no road running training session, instead a one off special Indoor SPORTSHALL athletics taster session at Hamfields. I will bring along some sign up sheets and if you enjoy the session and would like to do more then we could see if we have enough to put forward a team for the league. The league is for U11s, U13s and U15s but all welcome to the taster session as it’s all good Athletics training.

Have a great week!